The main focus of the Appleyard lab is to determine how neuronal pathways are controlled by factors that regulate appetite and how drugs of abuse impact these pathways. Our particular emphasis is on the role of catecholamine neurons in the nucleus of the solitary tract (NTS) in the brain stem. The NTS is the primary site of entry for visceral afferent nerve fibers carrying information from the periphery and as such it is the gate that determines what afferent information gets through to the rest of the CNS. The A2/ C2 group of catecholamine neurons lie within the NTS and receive direct inputs from visceral afferent fibers, including those containing information concerning cardiovascular and gastrointestinal systems. These neurons then integrate and relay this afferent information onto to multiple brain regions through their extensive projections, including to the hypothalamus, amygdala, nucleus accumbens and other brainstem nuclei. Release of norepinephrine and epinephrine at these target nuclei affects a broad number of behaviors, including reward, stress, anxiety, food intake and cardiovascular function. Catecholamine neurons in the NTS have also been proposed to be important for both the rewarding aspects of opioids as well as some of the stress and aversive symptoms seen during opioid withdrawal. A major research goal of the Appleyard lab is to understand how opioids and other drugs of abuse regulate catecholamine neurons in the NTS and to determine how abuse of these drugs influences the function of this critical neuronal population.

We use a multidisciplinary approach combining pharmacology and genetics with patch clamp recordings from brain slices. We use a transgenic mouse model that expresses enhanced green florescent protein (EGFP) under the control of the tyrosine hydroxylase promoter to specifically identify catecholamine NTS neurons and labeling techniques to study particular projection pathways. The combination of these approaches allows us to determine how specifically identified NTS catecholamine neuronal pathways integrate different signals and whether these pathways are altered following drug abuse or during disease states such as obesity.

Suzanne Appleyard received her B.Sc. in Pharmacology from University College London in 1991 and earned a PhD. in Pharmacology/Neurobiology from the University of Washington in 1998. She carried out her postdoctoral training at Oregon Health & Science University (OHSU) from 1999-2003. In 2004 she became a Research Assistant Professor in the Vollum Institute and the Department of Physiology & Pharmacology at OHSU. Dr. Appleyard joined the Integrative Physiology and Neuroscience as an Assistant Professor in August 2007. 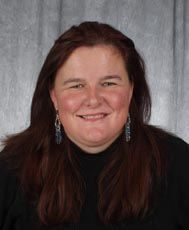